Handsome Hampton keeps everyone grounded at work in an architecture firm 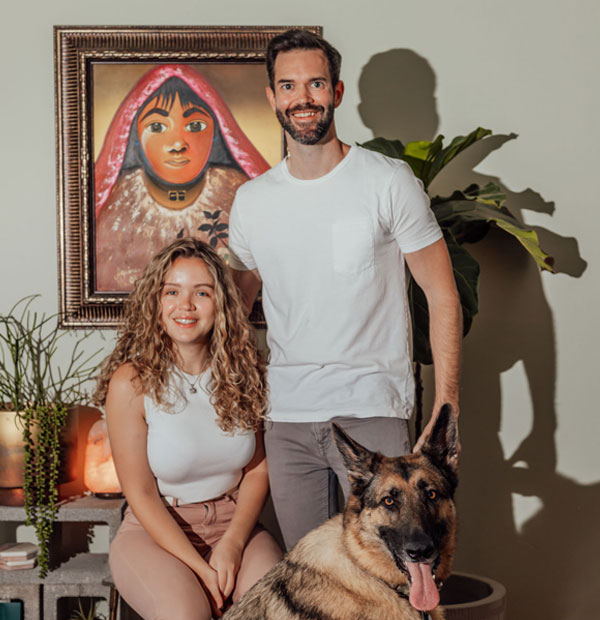 Handsome Hampton weighs about 130 pounds, but he’s a big baby.

“It’s funny because people think he’s like a police dog, but he just runs up to them” and wants to be friends, says Alexandra Mendez.
‍
She wasn’t looking for a dog because she likes to travel, and she has a busy career in architecture. But she found him on her commute one day at DART’s Hampton Station.‍

“I thought he was the cutest dog ever, and it had been storming,” she says. “I was like, ‘This dog has to have an owner.’”

But no microchip was found, and no one claimed him after she posted about him on social media. Mendez was pleased because Hampton had quickly found a place in her home — she’d bought a house in Elmwood about two months previously — and heart.

“I love him, and he loves his new house,” she says. That was about two years ago.

Mendez has since started her own architecture and interior design firm, Create Atelier, which is based at Tyler Station. Now Hampton comes to work with her, and he has a way of keeping everyone grounded.

“Hampton is our mood manager,” she says. “He’s the softest and sweetest.”

The next time Mendez took Hampton to the vet, after they’d been together for months, a microchip was found.

But it turned out that the previous owners weren’t interested in getting him back.

Mendez is originally from Nicaragua, and she moved to Oak Cliff after finishing college in Georgia.

She and Hampton enjoy walking the trail in Elmwood, and he loves people, but the hulking floofer is afraid of large dogs.“He thinks he’s a lap dog,” she says.

“He loves playing with dogs that are smaller than him.”

Contact Us!
Thank you! Your submission has been received!
Oops! Something went wrong while submitting the form.
Featured